The Jedburgh teams were three-man Special Operations teams from the United Kingdom, United States, France and several other allied nations. They worked directly with resistance groups as part of a covert war employed by the Western allies.  All Jedburghs were volunteers. The teams deployed in Eastern Brittany and were specially trained to conduct guerrilla warfare with the French resistance, in support of the Allied invasion of France.

JEDBURGHS are specially trained three-man teams. They will be dropped by parachute at prearranged spots in France, Belgium and Holland on and after D-Day. Each JEDBURGH team consists of two officers and a radio operator with his W/T set. One officer is a native of the country to which the team is going, and the other British or American. The members of the team are soldiers and will normally arrive in the field in uniform. There they will make contact with the resistance groups, bringing them instructions from the Supreme Allied Commander, W/T communications, supplies, and, if necessary, leadership.

The Jedburgh SOE teams were formed and trained in early 1944 at Milton Hall near Peterborough, in eastern England, with parachute training in March 1944 at Ringway, Manchester.   The one vital item of the team’s equipment was the radio set, essential for communication. 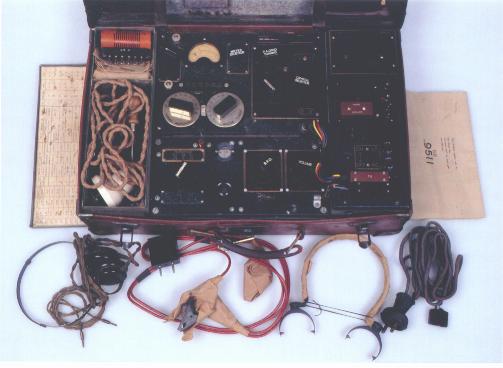 Above is the “Jed Set”, the type 3 Mk2 B2 spy radio set as issued to Special Operations Executive agents and other organisations during WW2 and also used post war in Malaya and Burma.  It consists of transmitter, receiver, mains/battery power supply unit, and  Bliley crystal in a suitcase.

Also vital to the SOE teams, and much smaller than a suitcase, was the Mark VI wrist compass. 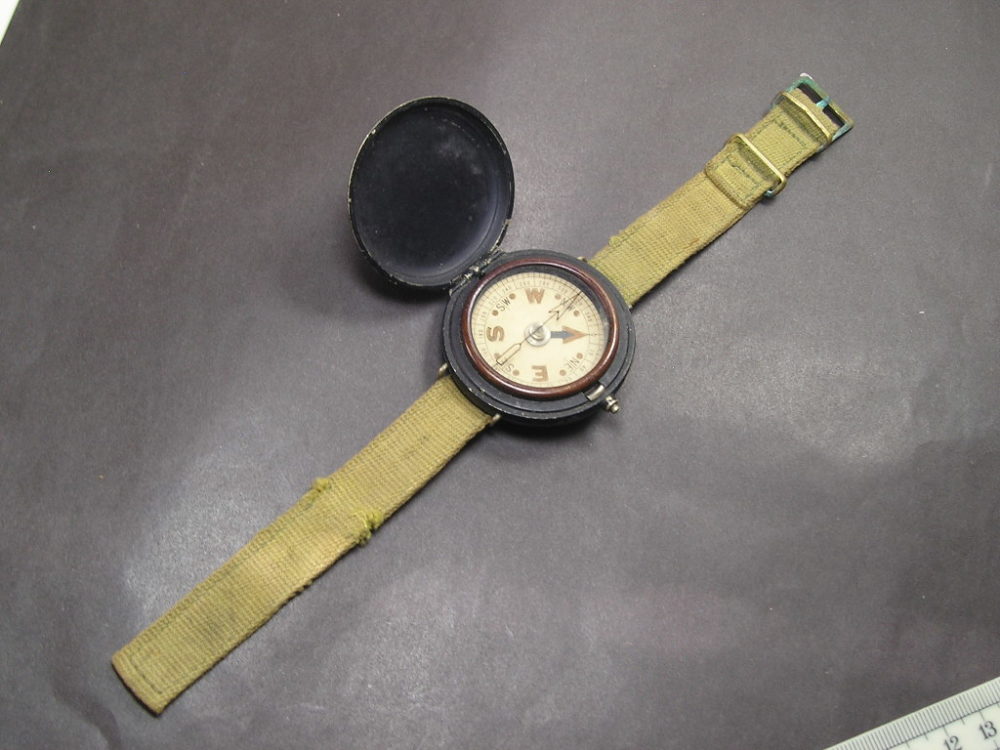 The Mark Vl wrist compass dates from WWl, and was issued in 1917 and 1918  to officers as a nickel plated polished hunter cased pocket compass with a bow.     It was much more precise than the Mark V pocket compass. 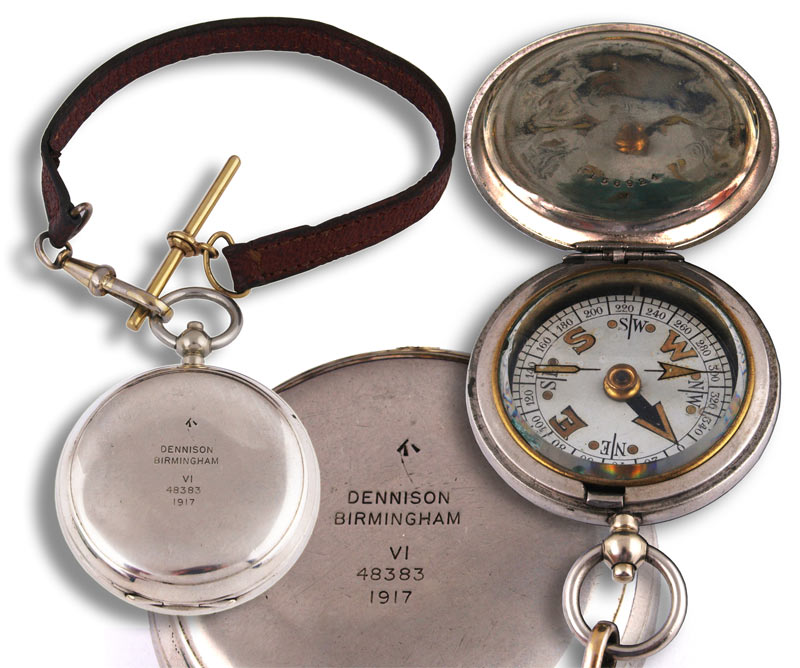 Above is a WWl officer’s compass made and signed Vl by Dennison of Birmingham, 1917 for the British army (with pheon). The nickel plated case is 45mm in diameter. The compass consists of a magnetised graduated dial card with a centrally inserted ruby stone. The card is mounted on a sharp pivot at the centre of the case permitting the card to rotate freely in the horizontal plane. When the lid is closed, a small lever raises the needle from the pivot and fixes its movement. The outer lid is marked with the pheon which attributes the compass to the British military.  It is further marked VI 48383 1917, Dennison Birmingham. 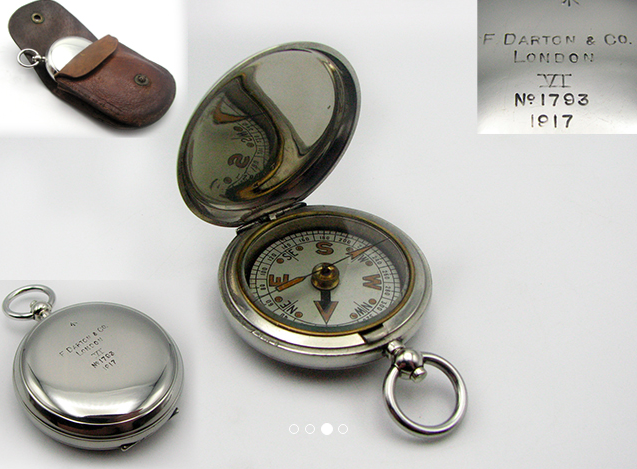 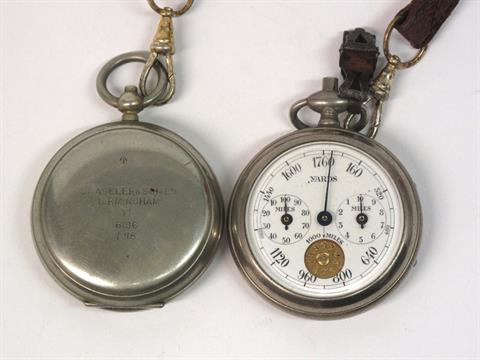 Above is a Mark Vl compass and also a range calculator.   The compass has a pheon on the case and makers details “C Haseler & Son Ltd Birmingham V1 6196 1918”. The other instrument has a face like a timepiece but measures range in yards and miles. These items possibly belonged to a British Artillery officer.

The nickel plated pocket compass was still issued in early WWll, and below is one on a lanyard. 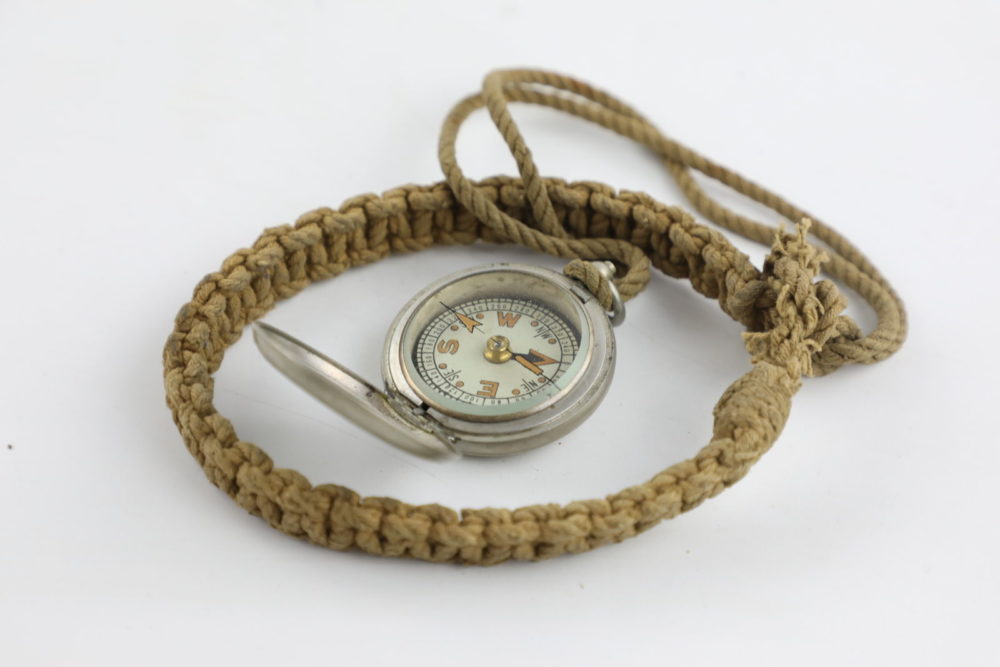 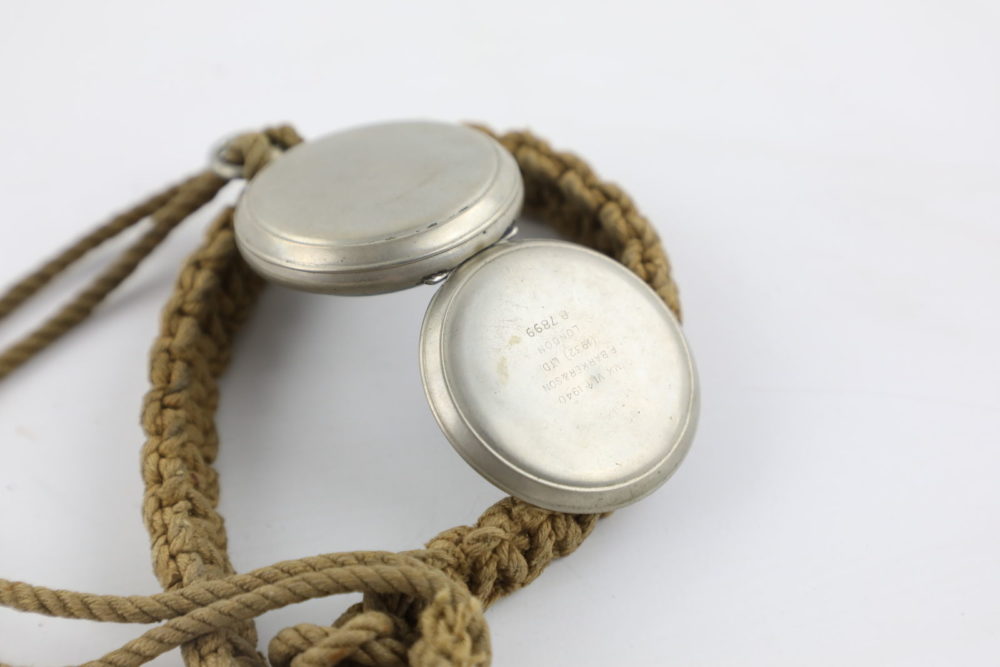 Just as hunter cased military watches acquired wire lugs over the course of WWl,  this compass acquired a slightly heavier blackened case, and lugs, in WWll for use by the Jedburgh teams.   The Mark Vl wrist compass is not stamped.

Early models had a pigskin strap, and below is one of the few remaining leather straps on the Mark Vl wrist compass.

Some khaki cotton straps are unmarked, perhaps being issued on prototype straps, and prior to the official designation of the AF0210 strap.   Or, like the compass itself, military markings were deliberately avoided.   Other straps are stamped A.F.0210.      DEF-3 straps with stainless buckles are also found on the Mark VI wrist compass. 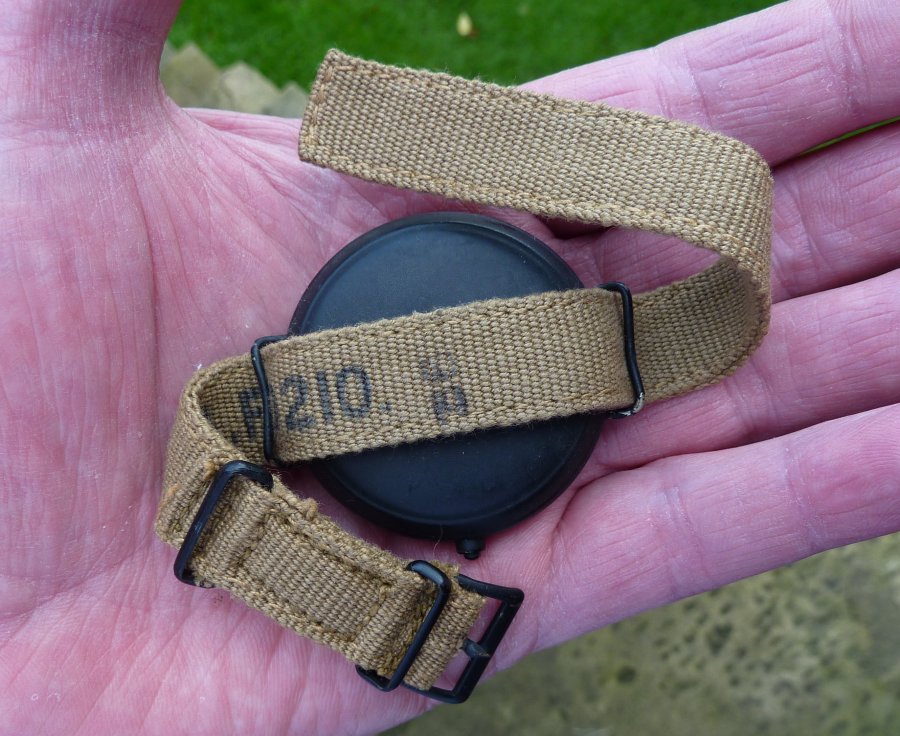 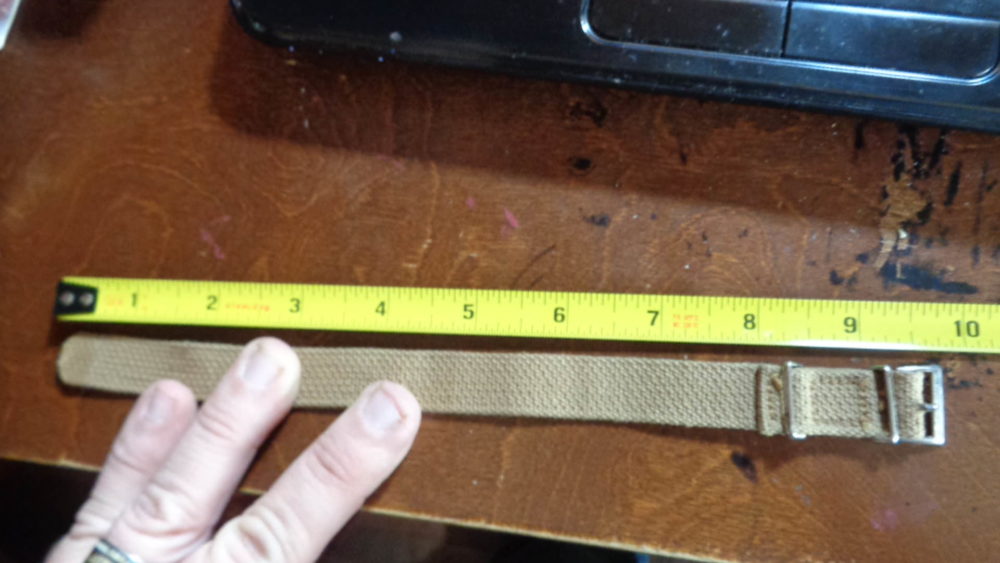 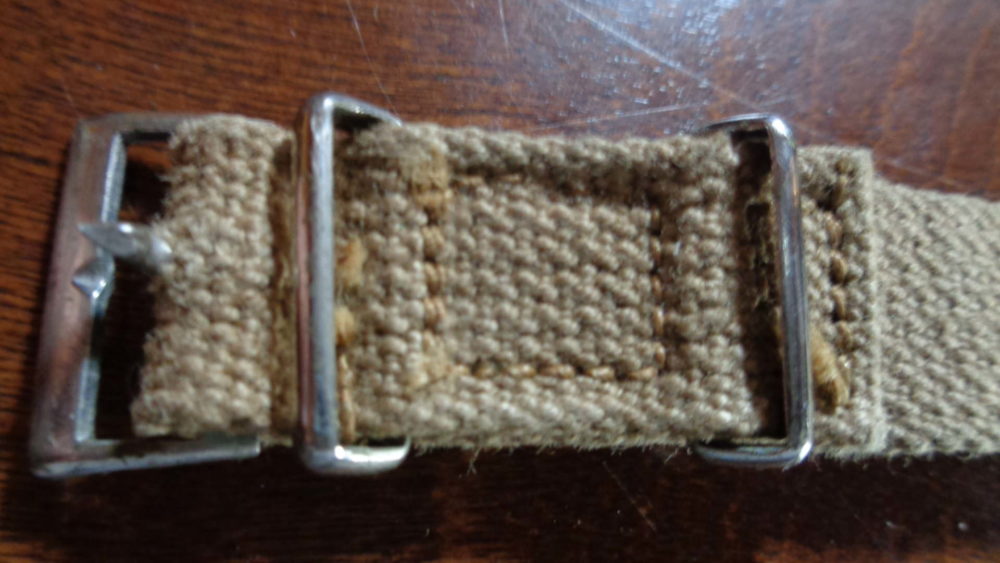 It is interesting that in 1905, a Mark V dial wrist compass, 38mm in diameter was produced, and then forgotten until 40 years later. 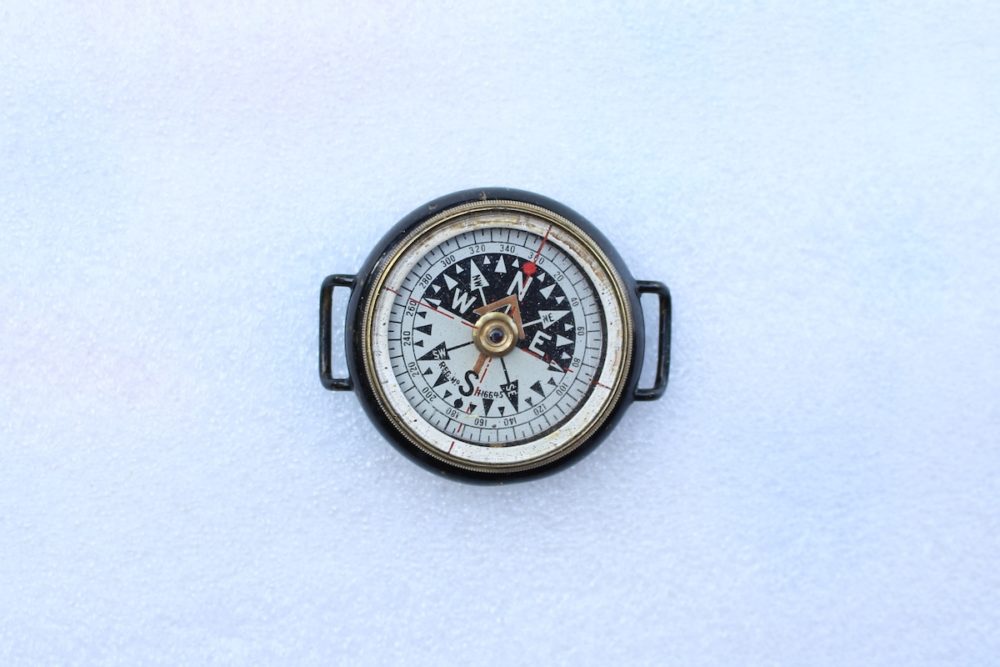 It is marked Negretti & Zambra, London. The dial is a variant of the Singer patent, often called the RGS dial.  It is marked ENGLAND REG. 416645. The British National Archives has the following information: “The design no. 416645 was published on page 1318 of the Official Journal of patents dated 30th September 1903, covering designs registered in the week ending 17th September 1903. The owners were Francis Barker & Son, of 12 Clerkenwell Rd, London WC“.  This compass was made by F. Barker & Son to be retailed by Negretti & Zambra.